In the present unusual situation, many of us are probably spending more time sitting comfortably than before. Some us are perhaps eating a bit more than usual as we have limited access to the world outside (I plead guilty to that one!).

What is meant by the word gut? 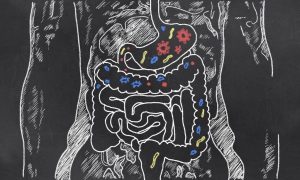 In this case it refers to the large intestine or colon. The solid remains of your food pass along here before being expelled from the body. The digestive system has done its best to extract nutrients by this point leaving a sloppy mixture that consists mostly of water and remnants that the stomach and small intestine can’t break down – especially fibre. At school I was taught that this was waste matter, it helps the colon to work, but was of no nutritional value.

As muscular contractions push the remains along, most of the water is absorbed through the wall of the colon.

However, the colon is not an empty tube. It is the residence of a vast number of microorganisms – about 100 trillion of them! The majority are bacteria but it also includes fungi, viruses, and protozoa (single-celled animals). Yes, there is a whole zoo inside each of us made up of over 1000 different species. Collectively they are known known as the microbiome.

We have over 10 times as many bacterial cells in our body as we do human cells.

We have been brought up to think of all bacteria and viruses as nasty disease carrying germs, now we are probably even more terrified of them.

Time for a bit of a rethink.

What are they doing there?

So, what are they up to, all these trillions of microorganisms? Their main job is to produce many enzymes that can operate in an environment without oxygen. The enzymes create fermentation processes that can break down some of the metabolic waste passing along the colon. They are an invaluable part of the digestive process.

They produce many compounds as they are able to:

The chemicals they produce can affect many aspects of our health including;

The bacteria are therefore helping the body by producing these valuable nutrients. In addition, the body is providing a nice warm environment for the bacteria to live in.

If you have had a course of antibiotics for any reason, you probably experienced some diarrhoea towards the end of the course and for a few days after.

This is because the antibiotics damage the ecosystem that the gut bacteria have established, with the result that this final stage of digestion is disrupted.

There is growing evidence that having a relative lack of diversity of microbes in the gut is related to a number of health problems.
The typical Western diet, which has a relatively low fibre intake, a lack of fresh fruit and vegetables and a high proportion of processed foods, does not encourage great diversity.

Where does the microbiome come from?

It is thought the microbiome begins very early in life – as the infant descends through the birth canal, it can receive microorganisms from the mother’s body.

The composition of the microbiome is influenced by diet. In the past, geographical location and environment would have had a major influence on the diet of different populations as most people would have consumed what was available in their locality. The individual species of bacteria are quite fussy about what they like.

Always eat the right foods to keep your gut healthy

So you can promote a good diverse microbiome in your gut by eating several different types of unprocessed food – fruit and veg are particularly important.

Donald Trump famously lives mostly on burgers, steak, fried chicken, pizza and diet Coke. Wonder what his microbiome is like!

In conclusion, for good health we need a diverse range of organisms in our gut making many different chemicals.