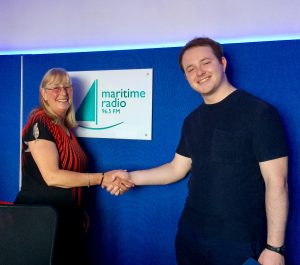 With Maritime Radio, they are a Greenwich based radio station and broadcast out of studios in Shooters Hill, London. They are owned and operated by Greenwich Media C.I.C, and available on 96.5 FM in the Royal Borough of Greenwich area and online.

Sandy was interviewed by Jack Mooney; and immediately he made Sandy feel at ease, and asked her a number of questions about Feel Good Co-operative before going ahead with the recording.

In the interview allowed Sandy to speak about the role of Feel Good Co-operative in the local community, and our forthcoming Pamper & Feel Good Day event on Saturday 22nd June, at Abbey Wood Community Centre, South London.

The broadcast went out on 18th June for Maritime Radio morning show, again and during Drive Time show in the evening.

Part One of Sandy interview on Maritime Radio (96.5FM)

For Sandy, it was a great experience for her and a terrific promotion for Feel Good and our dedicated volunteers.