This short article looks at two fermented gut friendly products produced by the action of bacteria and yeasts. Both have recently grown in popularity, namely Kombucha and Pickled Vegetables.

What exactly is Kombucha? 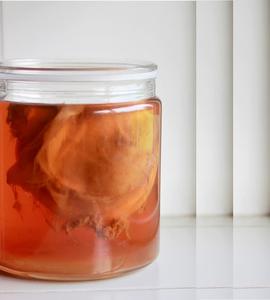 To me the name Kombucha sounds like it should be some sort of exotic alcoholic cocktail. However, the basis of Kombucha is actually …..Tea. But this infusion – widely consumed in the UK on a daily basis – is quite transformed by the process of – you guessed it! – fermentation.

The end product is a drink that is slightly sweet and tart as well as being naturally effervescent. Tea is naturally rich in antioxidants so this makes kombucha even more beneficial.

The tea leaves, either green or black, are first soaked in hot water. The infusion must be sweetened before the culture is added. The culture is a mix of microbes, a bit like the culture for kefir and is known as a SCOBY (Symbiotic Culture of Bacteria and Yeast). It is sometimes referred to as a “tea fungus”. During fermentation it floats as a solid lump at the top of the liquid, but is removed when the kombucha is ready to be bottled or canned.

The SCOBY is made up of:

By the end of the fermentation nearly all of the alcohol has been converted enabling kombucha to be sold as a non-alcoholic drink.

Where does it come from?

The origins of kombucha are most likely from Manchuria in China – given the availably of tea plants in the region. Its use was first recorded about 200 hundred years ago, but its origins may go back much further. The origin of the name may be derived from a Japanese physician who purportedly used the drink to cure an Emperor of a digestive disorder.

Kombucha became popular in Russia around 1900 and its use gradually spread over Europe and then to the New World. It first became commercially available on a large scale in the late 1990s and its popularity has proliferated over the past twenty years. As well as the gut health and antioxidant health benefits Kombucha has also been marketed as an alternative to alcoholic drinks. It is now widely available in supermarkets and health food shops.

If you have never tasted it, you might like to give it a go. It can be purchased in its natural form and is also available with additional fruit or spice flavourings.

Interestingly, the SCOBY culture itself can be dried out and it then becomes a strong leather-like material known as microbial cellulose. This material can be moulded to produce clothing. A truly useful product indeed! 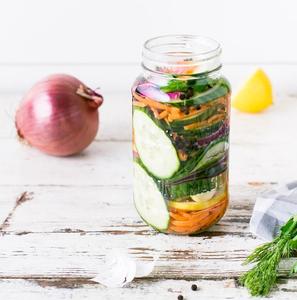 Traditionally, preserving fruit and vegetables was a necessity. Produce was harvested from fields, orchards, gardens or hedgerows depending on the season.

Some varieties could be stored to provide food over the winter:

But most produce would deteriorate rapidly and the harvesting season was usually short. Pickling vegetables was a cheap and convenient means of preservation.

I imagine we are all familiar with pickled onions or gherkins. These are produced by immersing the vegetables in hot vinegar. This might be a proper brewed vinegar made by secondary fermentation of wine, cider or beer, or we also have the option of “non-brewed condiment”. This is created by flavouring and colouring acetic acid to imitate malt vinegar and is often found in fish and chip shops! Other vegetables can also be preserved in this fashion.

This method can also be used to infuse the flavours of fruits, herbs and spices into vinegar to create flavoured vinegars. Wine vinegar is most commonly used for this.

Where does fermentation come into it?

The really gut healthy beneficial method of preservation does not involve using vinegar at all in the preserving process. The sour taste is produced by natural fermentation of lactobacilli. We have already encountered them in connection with the production of yoghurt. Hence the process is known as lactofermentation. The lactic acid produced prevents the vegetables degrading.

Vegetables preserved in this fashion will keep for several months. Nutrients are made more easily available to the body and the fermentation also produces enzymes and products to protect the immune system.

Most vegetables can be preserved by this method, but the best known are:

It is possible to buy commercially produced vegetables that were pickled naturally, but they are often pasteurised after fermentation. This prolongs the shelf life but kills off the gut friendly bacteria. However, it is not difficult to make your own:

If you want to find out more about kombucha or naturally pickled vegetables lots of information and recipes are available online.