In this series of short pieces about maintaining your health by looking after your gut, one word that keeps cropping up is fermentation. I think we cannot look at fermentation without considering the role of alcohol and its cousin vinegar. 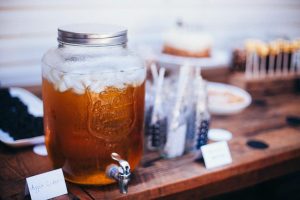 You may well ask “What have they to do with gut health?” Well, read on…….

Early humans would have been aware that consumption of over-ripe fruit can have an intoxicating effect on people and animals (though not apparently on fruit bats!). The first archaeological evidence of wine production comes from the Caucasus Mountains about 8000 years ago. The Celts were making cider in Northern Europe before the Romans encountered them.

The relatively high sugar content of fruit favours fermentation by yeasts rather than bacteria and we all know what that produces!
Using yeast to transform fruit into wine or cider is a method of preservation. Many fruits cannot be stored for long periods. The fermentation process enables nutrients and antioxidants to be concentrated in the liquid and the alcohol prevents degradation.

What about beer? Grains, soaked in water, are also attractive to yeasts because of their high carbohydrate content. The origin of fermented grains was perhaps accidental. Bowls containing a malt – based residue have been discovered in Mesopotamia dating from 10000 years ago. It is thought that the grains were boiled to make a type of porridge. If some of this was left in the bowl for several hours it may have started to ferment in the warm climate.

Unlike many fruits, grains can be stored if kept dry. So why are they commonly consumed in a fermented liquid form? Apart from the fact that people like it!

Well, in the past it was essential for the health of the populace. Water supplies were often tainted. People had no knowledge of the cause and there was no way of testing. But it was known that brewing destroyed whatever it was that made the water bad. People drank a weak beer known as “small beer” because it was far safer than consuming water. Beer also has nutritional value, for instance, it was recognised as a good source of B Vitamins. In the early part of the 20th Century the diet of people on low incomes was extremely poor. Beer, usually stout, was given to nursing mothers on prescription. A practice that continued until the 1960s.

These days most beers are pasteurised to extend their shelf-life. But cask-conditioned ales are not and therefore contain a greater variety of organic compounds. They are produced in smaller breweries and much loved by real ale enthusiasts.

What has this to do with gut health?

In the process of making the wine, cider or beer all solid matter is removed and the yeasts are killed. Whilst these beverages may contain a variety of antioxidants that are known to support our health, can they have any effect on what happens in the gut?
A large study using female twins found that the people consuming moderate amounts of red wine had a greater variety of beneficial microbes in their colons. Research in this field is ongoing and the mechanisms are not fully understood.

One important group of antioxidants present in wine cider and beer are polyphenols. Polyphenols in beer are derived from malt and hops, apples provide polyphenols in cider, polyphenols in wine are mostly derived from grape skins and dark berries.
Polyphenols are a broad class of compounds. They are classed as a type of soluble fibre and potential health benefits from their regular consumption include reduced levels of inflammation, improved heart health and protection of the vital gut mucous. Smaller polyphenols are absorbed into the body via the small intestine, but the majority are larger and more complex. These are the ones that can reach the gut without being broken down in the digestive process. They react with some strains of gut bacteria in a complex manner. This promotes the growth of the bacteria, but may also make the polyphenols more available and therefore more potent. Hence, this interaction is helpful to the body.

Unfortunately, the beneficial effects of consuming beer, cider and wine are not a justification for an increased intake! Only small amounts are required to produce the health benefits. Also, alcoholic drinks can bump up your daily calorie intake and a lot of people are finding it harder to control their weight during this period of lockdown. Therefore, there is no excuse for exceeding the Government Guidelines for Responsible Consumption of Alcohol.

Vinegar has a close association with wine, cider and beer. The name vinegar comes from the French “vin aigre” meaning “sour wine”. Once an alcoholic beverage has been created it must be sealed as there is a type of bacterium in the atmosphere that loves to feast on alcohol. Its name is acetobacter. It turns alcohol into acetic acid by a secondary fermentation process giving rise to wine vinegars, apple cider vinegar or malt vinegar, each with its own distinctive flavour.

During the fermentation period the bacterium is visible as a mass in the fermenting vessel. It is often known as a “mother” and can be used as a starter for another batch. Artisan vinegars are usually fermented slowly to allow flavours to develop. Most nutrients are preserved in the acid. These vinegars are valuable for gut health as they contain live bacteria as well as polyphenols and other antioxidants. But most commercial vinegars are pasteurised. This not only kills the beneficial bacteria, but also destroys some of the other compounds. However, it is possible to purchase unpasteurised vinegars – apple cider vinegar being the most common.

Medicinally, vinegar was recognised as having anti-infective properties. It was used to dress wounds and ulcers, and for hand washing before surgical procedures. It was also considered useful for the treatment of diabetes. Vinegar was often administered mixed with honey – this was known as oxymel. It was taken for a number of disorders including digestive and respiratory problems. Herbs were often infused in vinegar as it can extract minerals from plants.

We have all seen vegetables suspended in vinegar in jars. It has traditionally been used for preservation as most microorganisms cannot survive in an acidic environment. Nowadays vinegars are mostly used for culinary purposes: in cooking or salad dressings.
There are even vinegar-based beverages you can try.

Drink vinegar? Really?????? If you have never heard of Switchel or Shrub let me introduce you. 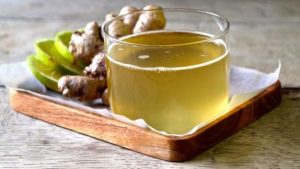 Switchel is a traditional product. It originates in its present form from New England in the USA and is known to have been consumed by farmers since the 18th Century. In the past, it was used as a refreshing cold drink given to farm workers labouring in the fields. Hence the nickname of “Haymakers’ Punch”. Now it has become fashionable in some quarters.

The basis of Switchel is Apple Cider Vinegar. It is combined with citrus fruit, something sweet and ginger.

You can buy Switchel ready-made if you fancy trying it. It is also easy to make yourself as you start with naturally fermented apple cider vinegar. The following is a simple recipe to make a traditional ginger switchel:

Peel and slice the stem ginger is, then infuse by boiling it in some of the water, leave to cool

Put all the ingredients into a jar, put the lid on and allow the flavours to combine. This can be chilled to make a summer drink or left at room temperature.

The quantities given in this recipe can be varied according to personal taste. Ingredients can be omitted or substituted with other things eg mint.

You can add carbonated water to the switchel. It even makes a good mixer with some alcoholic spirits. 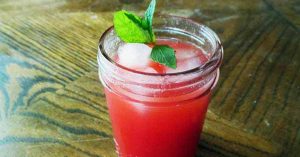 A drink with Shrub

Shrub is another traditional gut friendly vinegar-based beverage. Again, it is very versatile product – it is a mix of fruit, sugar and naturally fermented vinegar. Apple cider vinegar is the most readily available. Shrub is a syrup that can be diluted to produce a long drink, or used as a mixer with alcohol to produce a fruity cocktail.

The good news is that it can be made all year round using different seasonal fruits according to personal preference. Even rhubarb makes a good shrub.

There are two methods of making a shrub:

Mix fruit and sugar, place in a covered dish and leave for 2 days stirring occasionally. Then strain out all the juice into a bowl – discard the fruit. Add vinegar to the juice – the amount can be varied according to personal taste. Place in a jar, seal and put in the fridge.

In a saucepan dissolve the sugar in the water over a low heat. Then add the chopped fruit. Simmer until the fruit has softened and the liquid has taken on the colour of the fruit – the time required will vary depending on the type of fruit used. Add the vinegar and stir. Off the heat, strain out the fruit. Put the syrup into a jar. When it has cooled seal the top and place in the fridge.

If you like experimenting you can add herbs or spices that will complement the fruit used.

I hope this article has given you some insight into the uses of alcoholic beverages and vinegar. As ever there is plenty of additional information about these products on the Internet.