Bio Yoghurts and Kefir are products that can have a beneficial effect on gut health. Traditionally, they both come from a nutritional product, namely milk. But the milk is transformed by the process of fermentation. 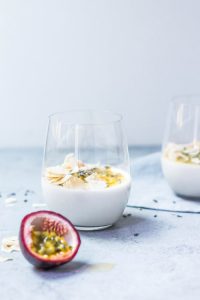 The origins of fermented dairy products go back thousands of years. The earliest archaeological evidence is from around 5000BC in the area now known as the Middle East. By that time humans were domesticating animals of the bovid group – that’s cows, sheep and goats. As well as milk they provided meat, and skins or fleeces. Nothing was wasted when the animals were slaughtered. The stomachs of the animals were made into bags and often used to store milk.

In warm climates milk would not say fresh for long, refrigeration not yet being available, and would go off quickly. However, sometimes the milk would thicken and turn sour, but still be edible. In this form it would keep much longer than fresh milk. At some point It was discovered that adding a little of this “soured” milk to fresh milk caused it to transform into the sour form, so there was a reliable means of producing this nourishing liquid.

The people originally consuming it had no way of knowing that micro- organisms were transforming the milk. But, over time they also became aware that consuming it regularly helped to maintain their health.

This is the origin of both yoghurt and kefir.

So what is the difference?

The bacteria involved in producing yoghurt are mainly lactobacilli. They would have been naturally present in the bodies of the animals being milked, including their stomachs. Lactobacilli cause fermentation of lactose in the milk to produce lactic acid. This causes the sour taste and enables the liquid to keep well. The process also makes it easier to digest proteins. Hence, some people who cannot tolerate milk well are able to tolerate yoghurt better.

Yoghurt was not produced commercially until the early 20th Century when lactobacilli were isolated by a Bulgarian chemist ….. and a whole new industry was born!

These days we are all familiar with bio-yoghurts. You can find plenty of them on the supermarket shelves. How do they differ from the non-bio varieties?

Originally all yoghurts would have been made from milk that received no heat treatment of any type and it would have been teeming with bacteria. Nowadays it is normal for yoghurt to be made from milk that is first pasteurised before the lactobacilli bacteria are added. It may then be subjected to a second pasteurisation after the yoghurt has formed. This second pasteurisation process kills off the bacteria.

Yoghurts that are labelled “Live” or “Bio” have not undergone the second pasteurisation and still contain live bacteria. Therefore, if you are taking yoghurt to improve your gut health, these are ones you need to use.

You can make your own yoghurt in a vacuum flask or in a yoghurt maker by buying a starter or adding some live yoghurt to milk.

Yoghurt can, of course, be used in cooking to give dishes such as soup or curry a creamy consistency or as a substitute for cream or mayonnaise. It can also be used in baking.

I first came across kefir when I was in Hungary in 2004. It was commonly used by people for digestive problems. But here in the UK it was unheard of.

Not surprising that it was well known in Eastern Europe. Its origins go back to the Caucasus Mountains which form a natural barrier between Europe and Asia. For many years most of the peoples who inhabited the region were nomadic. Bags full of milk were hung from their saddles and they would ferment in the heat. The motion of the horses appears to have assisted the process. In later times, people used to suspend bags of milk from their doorframes. Each time anyone passed through the doorway they would knock the bag and agitate the contents.

Kefir was valued for its “magical” properties. Its use gradually spread throughout Eastern Europe and Southwest Asia. Widespread use of kefir in Western Europe and America is relatively recent. It is not given a second fermentation like most commercial yoghurts so all kefirs are “Live”.

How does kefir differ from yoghurt?

Kefir contains a greater variety of bacteria than yoghurt and also includes some yeasts, therefore there are more fermentation products. Modern research shows it has anti biotic properties, helps with secretion of saliva, and stimulates normal contraction of the colon.

The curds in kefir are smaller than those of yoghurt and more easily digested.

Kefir forms “grains”- clumps of casein protein and sugars with probiotic bacteria and yeasts. The grains can be removed from the liquid and used to start the next batch.

Kefir can be produced from non-dairy liquids. The liquid must contain some form of sugar to fuel the fermentation. I found a company that produces a kefir coconut water that is naturally fizzy, tastes delicious and is only about 5 Calories a tin!

Because kefir contains yeasts it is even possible to use it to make bread! My daughter tried it with great success. It can be used in cooking as a substitute for buttermilk, yoghurt or sour cream.

It is easy to find kefir in supermarkets now. If you have a local shop selling Eastern European food that you can get to at present, it may be cheaper there.

If you have never used these live cultures in your diet, I hope this short piece inspires you to give them a go. As ever the internet is a good resource for more information and recipes.