In this gut health article, I want to look a staple food that most of us consume regularly – often on a daily basis – namely bread.  It is not a product that would spring to mind as being associated with a healthy gut as most people tend to associate the fermentation process with liquids. But in the past bread making was closely linked with brewing because they both depend on the action of yeasts.


Bread has been a staple in the diet of many cultures. The Romans realised how important bread was and provided a free bread dole for the populace of Rome, together with free entertainments. This was not for reasons of philanthropy! The aim was to keep the large number of urban poor sufficiently well-fed and occupied so they would not rebel against the ruling patrician class. The policy worked well. The Roman satirist Juvenal famously wrote that the people longed for only two things “Panem et Circenses” – Bread and Entertainments.

In recent years one traditional form of bread that has grown in popularity is sourdough.  It is touted as being beneficial for gut health, in contrast to commercially produced breads. I want to compare them and see if sourdough lives up to its reputation.

What exactly is a Sourdough Loaf? 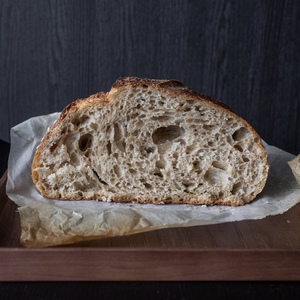 A sourdough loaf is produced by using wild yeasts as the raising agent. It has a chewier consistency and a slightly sharper, tangier flavour than commercially produced breads.

In order to make sourdough it is first necessary to create a “starter”. The basic ingredients for the starter are flour and water, though some recipes also add yoghurt or even apple to help the process. Wild yeasts and lactobacilli in the atmosphere get to work feeding on the carbohydrates in the flour causing the starter to bubble up as it releases carbon dioxide. It then needs to be “fed” with flour on a daily basis and grows in size. It is usually ready for use after about five days. Some of the starter is removed and mixed with enough flour and water to produce a dough. The rest of the process is the standard method of home baking a loaf but with a proving time of several hours.

The remainder of the starter is fed with more flour and part of it can be used to make another batch of bread. By always keeping back some of the starter and feeding it on a regular basis it can be kept going indefinitely. The starter is then referred to as a “mother”. Some bakers keep their mothers going for many years.  The oldest known mother is in the Boudin Bakery in San Francisco where they turn out 400 loaves every day using a strain of yeast that is over 160 years old!

As with most fermented products, the origins of sourdough go well back in time.  There is evidence of grain being ground in Neolithic Times – as far back as 10000 years BC. However, the oldest actual loaf found showing signs of having been leavened dates back to the end of the Neolithic Period -around 3500BC – and was excavated in Switzerland. The use of yeasts gives bread a lighter texture than unleavened flat breads. Pictures of bread being made by a leavening process have been found on Egyptian wall paintings.

Remarkably, yeasts are very resilient little organisms.  In 2019 samples of yeast were recovered from the pores in some Egyptian pots dated to about 3000 BC. They were fed a diet of ground up ancient grains and – amazingly – they came back to life and formed a new starter. It was put to use with great success to make some bread!

Other forms of Yeast

The Industrial Revolution led to greater urbanisation. Fewer people were baking their own bread, and there was more pressure on bakers to produce larger batches of bread to feed the growing population. Making a good sourdough is a slow process and something of an art form.

Some bakers began to use brewer’s yeast to bake. It would have been readily available as there were local breweries everywhere.  Loaves made this way had a slightly sweeter taste.

There was also a rise in the use of baker’s yeast. Specialised baker’s yeast had been developed in a convenient “cake” form.

Baker’s yeast works much faster so more batches of loaves can be baked in a day. It also works best with high gluten grains. Wheat with a higher gluten content was imported from America from the 18th Century onwards. Most wheat grown in the UK has a lower gluten content and was used for cakes, pastry etc.

However, in Germany the tradition of using sourdough starters to make rye bread remains to this day. This is because rye has a relatively low gluten content and works better with wild yeasts.

In the UK greater industrialisation favoured mass production. In 1862 a commercial process using carbon dioxide dissolved in water was developed, doing away with the need for yeast altogether!

Then in the 1960s the “Chorley Wood Process” was developed and is still widely used, mostly with refined flour. It uses yeast but works well with the lower protein domestic grain. High speed mixing machines enhance the action of the yeast and shorten fermentation time. A number of additives, including enzymes, are added to and change the texture of the bread making it very soft. A batch of loaves can be produced in about two hours. Not only that, but the bread is laden with preservatives giving it a long shelf life.

In the UK sourdough became practically unheard of and the white sliced loaf reigned supreme!

Is sourdough any better for you? 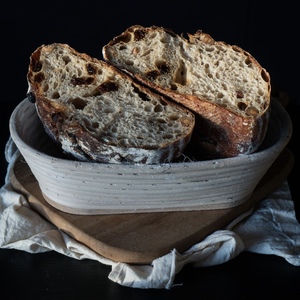 Why have some people been turning away from mass produced breads to this traditional artisan product? Can sourdough really be a healthier option even though the yeasts and bacteria are killed off during the baking process?

Many people complain that eating bread makes them feel bloated and there has been a rise over the years of “gluten sensitivity” with people reporting a range of symptoms such as fatigue or stomach pain. It was unheard of before the 1970s. This is not a true allergy as it cannot reliably be detected by blood or allergen testing. There are some studies showing changes in immune response and possible damage to the digestive tract. But at present the condition is normally diagnosed by giving the patient a controlled diet for a number of weeks. Part of the time the patient is given food containing gluten and part of the time the food is gluten-free. The patient has no knowledge of what s/he is eating during the trial and must record any symptoms in a food diary.

There is also a school of thought that believes the real problem may not be gluten, but a class of carbohydrates known as fructans. They are abundant in wheat and have been associated with Irritable Bowel syndrome in some people.

The good news is that whichever is the culprit the long fermentation period required to make a good sourdough causes both gluten and fructans to break down to some extent. This renders the bread more easily digestible. Less gas is produced in the bowel during digestion so bloating and pain are reduced. Hence, some people with “gluten sensitivity” are able to eat sourdough products.

In fact, the long fermentation time required for sourdough seems to be the key to its health benefits:

These days sourdough bread is widely available in bakeries and supermarkets.


However, there is no legal definition of what must go into a loaf that is labelled as sourdough. Sometimes bread marketed as sourdough is conventional bread with a dried “sourdough” powder added! So, it is worth enquiring how it was made.

You may want to have a go at making your own.  As usual there is plenty of information online on how to make your own sourdough starter and bake a sourdough loaf.

As a final note, I find it somewhat ironic to think that the handmade artisan breads for which we pay premium prices used to be the staple food of the poorest in society!